One More Visit With Santa 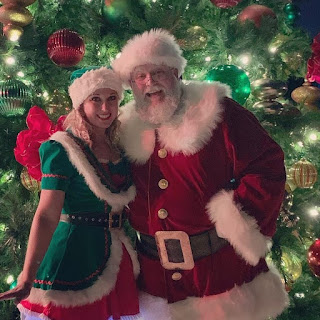 Peppermint Sparkles and Santa Claus (above)

My brother Eric and I were both actors growing up. Though we were both paid to walk on stages at times (an accomplishment in itself!), as a lifelong career, it was not to be.  Life had different ideas for both of us.

For me, it was a having a family.  Though I still performed occasionally when my kids were small, I knew it would go no further than an extended engagement.  My real vocation was writing for the stage, a craft that allows you to create from anywhere and send your work out to the wider world.  Still, if you’ve ever enjoyed performing for audiences, there are times when that little itch can become a downright irritating rash…that’s when I’ll tune my guitar and start looking for an open mic night.

It happened in a couple of stages for my brother too.  He made it much further than I ever did, actually supporting himself as an actor.  Blessed with a tenor voice that could’ve only come from the angels, he could work musicals or straight shows.  In a pinch a cabaret was fine.  He could do comedy and drama.  What he couldn’t do was keep going thinking that things were going to get easier as his thirties…and his knees…and his tired vocal cords…were slipping away.

At that point, becoming a cruise director was a logical choice.  Never at a loss when it comes to pressing the flesh, that was half of a cruise director’s job and, oh!  Was he good at it!  You could tell that the vacationers believed that where Eric went was where the fun was.  The job even afforded him the opportunity to get up on stage and joke with the audience as he introduced activities or entertainers.  Occasionally, he would hit it off with a fellow performer and they would work up a song and do a little routine as part of the show.

Alas, it is a small world even on the largest of cruise ships.  You work from sunrise until well after midnight.  You have minimal privacy, even with a private cabin.  The problems are the same, only the drunken vacationers are different.  If you ever worked in customer service eight hours a day, you know what it means to want an opportunity to shout STFU in someone’s face.  Yet, at the end of the day, you got to go home.  On a cruise ship, you’re already home.

He made it about three years.  Amazing, really, when you think about it.  I’m not sure I would have made it three hours.  Typically I am averse to drunk vacationers unless they happen to be me.

If life as an actor prepares you for anything, it’s being willing to take the big chances.  Eric took his on the mainland, in Florida, so he could continue to enjoy the tropical weather with his new wife, Renee. The job was the same, really, vacationers testing the boundaries of sobriety and propriety at every turn, but Eric was able to go home at night, to his Honey and their little dogs…it made a difference.  He settled in Orlando and bought a house, the first he had ever owned.  He got his voice back.  He had his knees fixed.

My fellow actors know this…you can SAY you are through with theatre but nothing is official until theatre says it is finished with YOU.  As it turns out, Eric had been rehearsing all along…for the role of a lifetime.  The resort where he worked decided to mount a production, a Christmas show, for their guests who come and stay over the holidays.  Who better to spearhead such an effort?  Second and more importantly, who will play Claus?

Well, you’d need someone tall (and Eric is over six foot), able to communicate with an audience full of children (check), maaaaybe a bit on the heavy side (and the good life had left him with a few extra pounds) and of course, always nice to include a Christmas song, so, how about a singer (double check)?  Add in a real beard and some pretty people in elf outfits, you got a show!

It didn’t stop there.  It progressed.  Every year, a little more was added.  Another song, another character.  At the end of the show it snows….yes, snow! In Orlando, Florida!

Being an enterprising man, Eric discovered that there were good paying engagements for a bearded fella with his talent and a certain red suit.  All the way up to the holiday he earned a generous wage at corporate gigs for kids to sit on his lap and share their deepest hopes and desires.  Your average Santa is done on Christmas Eve, as soon as the mall closes.  But this is no ordinary Santa.

For a set of triplet boys, Santa would appear every Christmas morning, unpacking their gifts from his big red bag.  Year after year, the three of them would roll out of bed and be served by the man himself.  I should caution that this didn’t come cheap, but what a memory those parents made for their children.  Can you imagine those boys when their classmates said Santa ‘wasn’t real’?

Even little boys grow up though.  The parents of the triplets decided that at eight years old, at least one of them would be hearing some hard truths about Yuletide legends and was unlikely to keep it to themselves.  There would be one last Christmas visit from jolly old Saint Nick.

But how do you explain your future absences to babies that have grown up with you?  When Claus quits coming does a child stop believing?  It’s such a short time they have to enjoy the fantastical stories we spin around our traditions.  With a few weeks until Christmas, Eric stewed over what he would say.  He finally settled on the truth, or at least a version of the truth.  This is why I say he was preparing for the role of a lifetime.

When he ho-ho-hoed his way into their living room for the last time, he distributed the gifts as he always did and received the appreciation back from the children as usual.  But at the end, Santa had added one little codicil…

“Now boys, I need to talk to you,” he said solemnly, kneeling down on a titanium knee.  The boys moved forward conspiratorially.  I think if he had told the boys to rob a liquor store at that moment, he could’ve been drinking Cristal on the way home. “I’m not going to be able to come see you anymore,” he said to their three shocked faces.  “There are kids younger than you who aren’t sure if they believe in Santa and I need to go and visit THEM on Christmas morning.  Do you understand?”  It took a second, but they came around to agreeing with the jolly old elf.

“One more thing,” he added.  “I will still bring you your presents…don’t worry about that…but I want you to give something to each other, and your Mom and Dad, and help me keep the Christmas spirit alive.  Will you do that for me?”  The boys looked at each other and nodded to Santa with resolve and just the slightest trace of smiles.  He had made the sale.

I don’t know what Eric made during his career on stage. I’m sure it wasn’t as much as he deserved. Even if it was FAR more than I suspect, it wasn’t enough.

You can’t put a price on believing in Santa for even one more day.