You Remember A Summer Evening 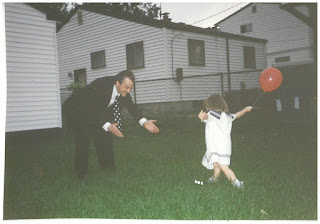 You remember a summer evening, you were coming home from a funeral.  You’re friends with the widow and it’s always hard to see someone in that sort of pain.  Yet when you pull into the garage and get out of the car, those blues all melt away.  A little girl shrieks, “Daddy!” and runs into your arms.  Your wife, always waiting for just such opportunities, snaps a picture that will hang on the wall even after twenty years.

You remember a baby that was no trouble, but always curious.  After ‘Mama’ and ‘Dada’ her first words were “What’s that?”

She asked a hundred questions a day.  We did the best we could to respond honestly.  Sometimes, being honest meant saying we didn’t know.  But we could usually find the answer in a book.

You recall the little girl learning to read and the world that opened up to her.  Yet one book would only provoke more questions, which required more books, that maddening, delicious circle.

You marvel that it was more than fifteen years ago when she would sit on the other side of the kitchen island while you prepared dinner, discussing politics and the issues of the day.  She wasn’t yet ten years old.  It doesn’t occur to you until years later that her interest in the issues was not focused on the policy, but on the people effected by the policy.

She mothers her little brother.  She mothers certain ones of her friends.  She screws up the courage to talk to a school counselor when someone she knows has been self-harming, or making steps to run away from home.  She feels everything deeply.  She stands up for what she believes in and speaks her mind, even when her voice quavers.  Soon, even that isn’t an issue.

You watch her go away to college and pursue her passions.  When she speaks to you about issues, her words are fast and fevered and you realize that the student has become the teacher.  Even as you defend your position, you secretly wonder if you’re somehow wrong.

She collects degrees and steps out into the world and realizes she has been sent up to home plate with a walking stick when she needs a baseball bat.  You suppose it’s possible to hit a home run with a walking stick but…what was it Giles Corey wanted in “The Crucible”?  Oh, that’s right…more weight…

She decides that a law degree is the weapon of choice and passes the LSAT on the first try.  She collects an acceptance letter and a nice scholarship for a law school that will take her from her home state for a considerable amount of time.  Still, you know the revolution will not be fought from an arm chair.  While you found your solace and a small amount of success in writing about the world as you wished it was, she decides to follow Gandhi’s advice and BE the change she wants to see in the world.  You joke that the little girl that was no trouble is now a woman that will be nothing but trouble to political opponents.  You wouldn’t have it any other way.

You remember a summer evening, you were coming home from a funeral.

You also remember that you each said ‘I love you’ when she drove away, which means she can come back any time she wants to.

These arms stay open all night.
Posted by a2qtip at 7:06 AM