Well, Lyle, if you’re not at the final round-up already, I’m guessing it won’t be long.  When I look at the pictures from more than thirty years ago, I hope you are at peace, even if you don’t remember your name anymore.  Despite my somewhat intimate knowledge of your life, I have no idea where or how you are.  Did you ever meet Felicia?

Someone tossed out your old photo album.  That’s how we met.  I’m guessing you have entered some sort of assisted living or…you know.  Whether it was a relative or just someone that was clearing your house, I found the album in a trash can.  It must have been a popular volume.  It has clearly been thumbed through a number of times.  Because of the captions you wrote, I’m guessing you liked to show this one around.

It’s got a lot of detail about that trip out west in ’85, when you met up with your brother and sister in Vegas and motored on to California.  It looks like you three took the measure of the Sundance Hotel and Casino!  You did your share of gambling, visited the steakhouse and even played some canasta when you got back to the room.  From the grins on your faces, you all had a great time.  I will respect your wishes and NOT ask how much you lost…but from the way you wrote it, it sure looked like you WANTED someone to ask.  You and your siblings all looked to be about fifty at the time…I hope you had more opportunities to get together.

Did you know that Sundance became the Fitzgerald Hotel in the nineties and is now known as ‘The D’, a Detroit-themed casino?  It’s one of the more popular spots on Fremont Street, Lyle.  Of course, you probably preferred the western motif from the era when you visited.  I wonder if you saw any cocktail waitresses that reminded you of Felicia.

It was nice of you to buy flowers before you went to see your Mom’s grave site.  One of them is
still pressed between the pages.  There is a certain symmetry to buying Mums for Moms.  Who took the picture by the gravestone?  Was it your nephew?

I’m assuming it was, because he probably would have done anything for you after you came to see him in the school play.  And then afterward, how you posed for a picture with your arm around him?  He looks like he’s going to pop the buttons on his vest…and you do, too.  I wonder if your nephew knew that you saved the program.  You sure are a good uncle, Lyle.

The family reunion looked like a blast.  Everybody crowded into the group shots but they’ve got you right in the middle, so surely you were one of the honored guests.  The barbeque looks delicious.  I’m guessing it was a hot day…you’re a little red-faced, though whether that’s from the heat or the twelve-ounce cans is impossible for me to know.  Did you see the guy that sent you that snapshot of Felicia?  And don’t play dumb with me, Lyle, I know you remember the one.  Someone wrote on the back:

Lyle-
I was in my apartment three days before I met my neighbor.  We share the same back yard.  I teach her English and she teaches me French.  Eat your heart out!

The front of the photo is a posed shot of a very beautiful, scantily-clad woman in a garden.  The hairstyle tells me it was taken in the early seventies.  That you had this stashed in the back of your photo album tells me something as well…I just can’t puzzle it out.  Felicia is probably someone’s Grandma now.  She probably wears a lot more clothing to do the gardening now, too.

I never saw anyone give their dog a party for graduating from obedience school.  I had never seen a dog eating at the table with his owner either, but I have now.  The smile on your face said you were good with it.

I wonder if you ever regret not marrying or becoming a father.  And Lyle, I have to think of you as a lifelong bachelor because, you see, I can’t bear the idea of someone throwing your photo album in the garbage.  I had nearly reached the last page of the album and was consumed with sadness over someone tossing your carefully collected memories away.  But you had one more surprise for me, didn’t you?

Inside the back cover, a larger page torn out of an album of formal portraits was stashed. It contained a professionally photographed 8 x 10, with “Lyle, 2nd Birthday” penciled on the reverse.  The photo is of you, my friend, dressed in a cowboy outfit complete with hat, vest, chaps and boots, atop a Shetland pony that wore a dress saddle.  This was clearly a much-loved boy.  You were someone’s little man, someone’s cherished child.

I had to keep it, Lyle, and I hope you would approve.  Perhaps it’s the romantic in me, but I believe old cowboys never die…they just ride off into the sunset.  So if you are still with us, I wish you another day on the range.  If you have left us, I wish you sweet dreams of open prairies, an untamed wilderness and a gal back home named Felicia. 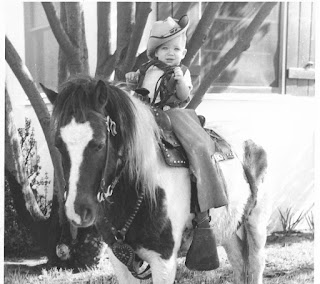